A unique and original way to remember and display something special...

Everyone has that childhood or seemingly distant memory with the memento that makes it come alive again. Why not enshrine that memento in a way that enhances those treasured memories.

The example shown concern baseball. It is baseball of the past, a wonderful time when the game was still a game and not a business. Players were in it to win it; they longed for the glory of winning it all and played as a team. Before it was a business and money and performance enhancing drugs were the route to quick success, it was talent and excellence.

The three items memorialized below remember three baseball teams before they were winners. We loved them because of what they did and who they were.

A few short years later, after years of success and breaking attendance records for all of baseball, the Braves declined to mediocrity and were lured away to the city of Atlanta through an endorsement deal with Coca Cola. Carpetbagging for quick money became the name of baseball. The Braves announced their move but legally were not allowed to break their lease with Milwaukee County Stadim; they were forced to stay one more year. Even with terrible attendance of that year, often erroneously cited as the reasoning for their move, the Braves did not have the worst attendance in the league.

This item remembers the great team and fans at a time of their height, when baseball was truly a game on the field and not the front office greed for financial gain.

This presentation remembers the beginning, with the very first pennant (1970), the hat most popular to the team during the 1970's and 1980's when they arose into a team of distinction, and several pins and mementos from the past, the larger white item being a pressbox pass for the closing of Milwaukee County Stadium, a place of history, beginning in 1953. The enshrined 1969 ticket was the first game hosted by the Brewer management, with funds going toward the purchase of a team. 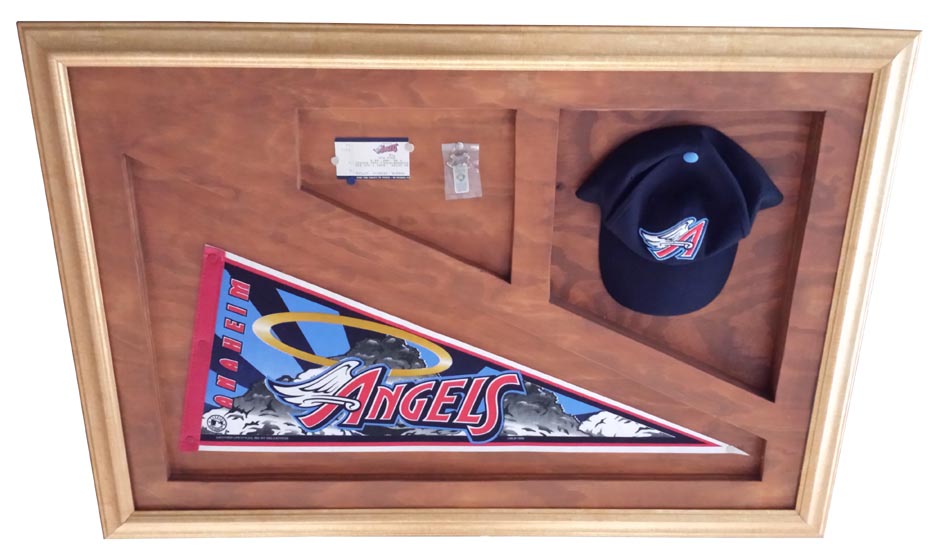 The club had been sold by the family and heirs of original owner Gene Autry to Disney in 1997.

The presentation shown is an example of something that can be created for you and your special mementos and memories.